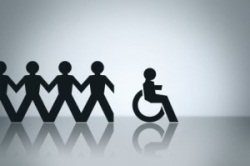 It is common to find that what causes a single type of impairment also causes others. This is particularly true where disease or trauma is severe, or in the case of impairments caused by aging.

Deaf-blindness is one commonly identified combination. Most of these individuals are neither profoundly deaf nor legally blind, but are both visual and hearing impaired to the extent that strategies for deafness or blindness alone won’t work. 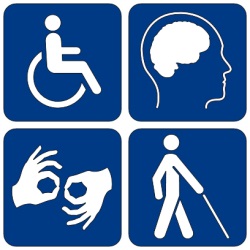 People with developmental disabilities may have a combination of mental and physical impairments that result in substantial functional limitations in three or more areas of major life activity.

For more information on any of the disability types listed in this section see:

Click on the disability type below for more details:

Visual impairment represents a continuum, from people with very poor vision, to people who can see light but no shapes, to people who have no perception of light at all. However, for general discussion it is useful to think of this population as representing two broad groups: those with low vision and those who are legally blind.

Low vision includes problems (after correction) such as dimness of vision, haziness, film over the eye, foggy vision, extreme near- or farsightedness, distortion of vision, spots before the eyes, color distortions, visual field defects, tunnel vision, no peripheral vision, abnormal sensitivity to light or glare, and night blindness.

Those who are legally blind may still retain some perception of shape and contrast or of light vs. dark (the ability to locate a light source), or they may be totally blind (having no awareness of environmental light).

Hearing impairment means any degree and type of auditory disorder, while deafness means an extreme inability to discriminate conversational speech through the ear. Deaf people are those who cannot use their hearing for communication. People with a lesser degree of hearing impairment are called hard of hearing. Usually, a person is considered deaf when even amplified speech cannot be understood.

Cause – Difficulty in receiving auditory information.

Effect – Unable to properly participate in lectures or presentations, if at all. 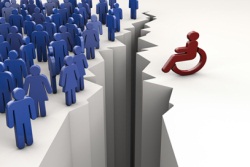 Problems faced by individuals with physical impairments include poor muscle control, weakness and fatigue, difficulty walking, talking, seeing, speaking, sensing or grasping (due to pain or weakness), difficulty reaching things, and difficulty doing complex or compound manipulations (push and turn). Individuals with spinal cord injuries may be unable to use their limbs and may use “mouthsticks” for most manipulations. Twisting motions may be difficult or impossible for people with many types of physical disabilities. The listed symptoms described are found in, for example:

For more information on the types of disabilities listed above and more, see: http://trace.wisc.edu/docs/population/populat.htm#physical

The type of cognitive impairment can vary widely, from severe retardation to inability to remember, to the absence or impairment of specific cognitive functions (most particularly, language). Therefore, the types of functional limitations which can result also vary widely.

Cognitive impairments may be categorized as:

There are very few assistive devices for people with cognitive impairments:

A number of injuries or conditions can result in seizure disorders. Epilepsy is a chronic neurological disorder. Seizures can vary from momentary loss of attention to grand mal seizures which result in the severe loss of motor control and awareness. Seizures can be triggered in people with photosensitive epilepsy by rapidly flashing lights.

The main symptoms of epilepsy are repeated seizures. Most people have a consistent pattern of symptoms.

Doctors classify seizures by how much of the brain is affected. There are:

Symptoms of a simple partial seizure (in which one remains fully conscious throughout) can include:

These seizures are sometimes known as “warnings” because they can be a sign that another type of seizure is on its way.

Complex partial seizures are when one loses their sense of awareness and can’t remember what happened after the seizure has passed.

The symptoms of a complex partial seizure normally involve more regular behaviour such as:

For a list of the types of generalised seizures (where most or all the brain is affected) consisting vastly of the symptoms listed above, see:
http://www.nhs.uk/Conditions/Epilepsy/Pages/Symptoms.aspx

When to call an ambulance:

It will not usually be necessary to call an ambulance after a seizure. However, you should call 999 if: