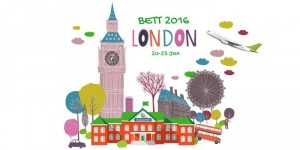 I spent a few days at BETT 2016 in the London Excel Centre last week. If you don’t know about the Bett show, it’s a unique experience, with 4 days of innovations in education technology from all over the world, and well worth a visit. However, it is also a sales arena, so you can get very distracted. I was focused to some degree, but that didn’t stop my eyes and ears being enticed by pretty colours and exciting ideas! Here are a few of my favourite finds. 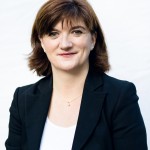 The Rt Hon Nicky Morgan MP opened the show, sharing the government’s long-term economic plan of ensuring everyone has broadband access no matter where they live by 2017, to the tune of £1.7 billion. She quoted from last year’s annual survey by the British Educational Suppliers Association (BESA), that 65% of primary schools and 54% of secondary schools don’t have access to a good WiFi connection, also that a significant number reported that their broadband provision was poor. So these new infrastructure plans will include superfast broadband to over 95% of the UK by 2017. She also announced further partnerships with some leading technology firms like O2, Google, BT, IBM and HP collaborating with some of the UK’s best universities to train the next generation of computing teachers. All interesting stuff!

A fascinating application that she mentioned was Quick Key (which I didn’t find at Bett), which is a scanning app for mobile phones that allows a teacher to scan a whole class set of answers in about a minute. Letting them pinpoint exactly how well the class are doing, freeing them up to spend more time delivering lessons in the first place. There are lots of similar free products on the market, but this does look good. Had a little play when I had coffee!

I spent most of my time in either the Higher Education Learn Live theatre or the Technology In Higher Education Summit where there were some interesting discussions about the use of learning technologies in the sector. Alongside these I was looking for interactive products to test, whilst trying to discover the trends developing for 2016.  A key theme was definitely collaboration: learners sharing content between themselves and with their teachers, teachers pushing and pulling content back and fore, across devices, platforms, counties, countries and continents. The question was really how much did you want to spend? 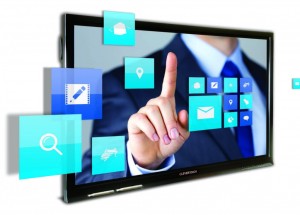 My favourites were: CTouch and Oktopus (although I didn’t like the spelling of some of their products); Clevertouch with Clevershare and DisplayNote; Canvas VLE and the clever mobile device charging solution Classcharge. There were many, many stands at Bett selling and demonstrating some wonderful products, but there were lots of the same thing, so as I said it was easy to get side-tracked.

She began by reminding us that the demand for higher education will double by 2025, and stated that we need to plan for this. She suggested that we should be implementing a range of successful blended learning practices and pedagogies to improve our learners’ experiences and attainment.  She talked about the power of MOOCs and suggested that they shouldn’t be free, if students had to pay for their education, then highly paid academic staff should be paying for their continuing professional development too. She suggested that we need a more critical understanding of what MOOCs are actually achieving and what more they could do to address the really important educational challenges our institutions face.

Amy Lin from TES, founder of Blendspace, shared How to create a digital lesson in 5 minutes. Amy demonstrated another approach to incorporating flipped, project-based, or digital learning in the classroom without struggling with technology.  She also showed us how to use the free Blendspace tool – which is now part of TES – and encouraged us to start creating digital lessons in just five minutes (although I’m sure that is just a broad guestimate!) 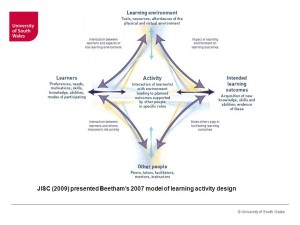 Another of my favourites was a seminar Good Practices to Teaching using a VLE with Jacqui Neale from University of South Wales. Jacqui talked about the Jisc model of learning Activity Design and the impact that it had on her and her colleagues as they planned their flipped and blended learning spaces using Blackboard. The session was particularly good as she made it as generic as possible, talking more about pedagogical changes and effective practices rather than any particular hardware or software. Both her and her colleague talked of high student expectations, and of having high expectations of them in return.