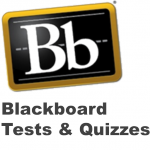 Today’s Make one Change covered the Tests Surveys and Pools features within Blackboard.  It seemed to be a popular session, with staff attending from a variety of colleges, not to mention those who were watching via the Live Stream or following on Twitter.

Today’s session was simply an overview session – a whistle stop tour of Tests, Quizzes, question types and various options including those around accessibility, as well as some time on the little known “Item Analysis” feature – this can help you determine the effectiveness of your questions, and can arm you with what you need to cover in next week’s recap session (assuming you’ve tested on this week’s lesson).

All in all, there were 17 question types, so plenty to be getting on with, and I was able to think of examples for a variety of subject areas, though I don’t profess to be a subject matter expert!  Following the overview, I then give a quick demonstration of how to set up a test, though due to time constraints and the fear of overburdening staff with too much information, I only picked on two question types.

They were enough for me to go over some of the options.  All in all, I felt that it was an informative session and appeared to be well received, though in hindsight I think I’d probably cover less content with some documentation.  But we live and learn.

I’ve promised to put together a step by step document for attendees on setting up the various question types, and also to go through some of the options, but it will be a few days before I can create that.  In the meantime, I’ve attached my powerpoint presentation with speaker notes for those who want to have a look at what was covered.  The video will be up on eStream in due course.