Mental health conditions impair a person’s ability to think, feel and behave in a manner that allows optimum functioning in day to day life, ranging in type and degree from relatively minor to severe illnesses that require ongoing treatment. 1 in 4 people in Britain will experience some sort of mental health problem in the course of a year.

Please note: This is a brief introduction. As such, it does not reflect the full variation in mental health conditions. It is recommended that staff follow the external links provided for more detailed information.

There are a growing number of recognised mental health conditions including (click on the condition for more information): 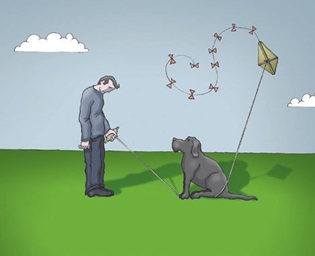 Depression is not sadness over a matter of days. It is usually a long-term illness, lasting for weeks, months, or years at a time. At its mildest, one may simply feel persistently low in spirit, while at its most severe depression can make one feel suicidal and that life is no longer worth living.

Many people with depression also have symptoms of anxiety and a sense of worthlessness or hopelessness. The two illnesses are often interlinked. Mixed anxiety and depression is the most common mental disorder in Britain, with almost 9% of people meeting criteria for diagnosis. (The Office for National Statistics Psychiatric Morbidity report, 2001)

Insightful video of depression, characterised by ‘The Black Dog’:
https://www.youtube.com/watch?v=XiCrniLQGYc

Anxiety is a feeling of unease, such as worry or fear. Those with an anxiety disorder experience more than regular or ‘normal’ anxiety such as that before sitting an exam. It is the main symptom of several conditions, including panic disorder, phobias, post-traumatic stress disorder and social anxiety disorder (social phobia). Generalised Anxiety Disorder (GAD) is a long-term condition that causes one to feel anxious about a wide range of situations and issues, rather than one specific event. 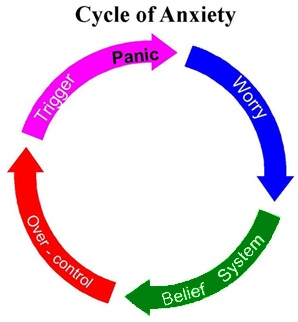 Obsessive compulsive disorder (OCD) is where a person has obsessive thoughts and compulsive activity. An obsession is an unwanted and unpleasant thought, image or urge that repeatedly enters a person’s mind, causing feelings of anxiety, disgust or unease. A compulsion is a repetitive behaviour or mental act that someone feels they need to carry out to try to temporarily relieve the unpleasant feelings brought on by the obsessive thought.

Eating disorders are characterised by an abnormal attitude towards food that causes someone to change their eating habits and behaviour. A person with an eating disorder may focus excessively on their weight and shape, leading them to make unhealthy choices about food with damaging results to their health. There a range of conditions that can affect that person physically, psychologically and socially.

The most common eating disorders are:

Schizophrenia alters a person’s perception of reality, their emotions and behaviour. Symptoms are categorised as ‘positive/excessive’ or ‘negative/subduing’.

Negative symptoms tend to be longer term. They are termed ‘negative’ because they describe a loss of normal functions. They include lack of emotion and motivation, sleep deprivation and fatigue, and becoming withdrawn and isolated.

Bipolar disorder causes extreme shifts in a person’s moods, with recurring episodes of manic and depressive thoughts throughout their lives, although many are free of symptoms between these episodes.

The symptoms of manic behaviour include:

The symptoms of depressive behaviour include:

Stressful life events or physical injuries as well as other factors can lead to the onset of symptoms of the illness.

A person can have symptoms of both mania and depression at the same time.

Psychotic behaviour may also be present during severe episodes of either mania or depression. This can include delusions and hallucinations.

Explore the Effects on Study of different mental health conditions

Mental health issues can affect study in a number of ways, although without prior knowledge of a diagnosis it may not appear that these effects are caused by a mental health condition.

The detrimental effects of a severe mental illness are more easily identifiable than those of the less severe forms. For example, a student’s studies may be interrupted by spells of relapse, hospitalisation, or experiencing adverse side effects to prescribed medication. Other students may display symptoms that could easily be experienced by any student such as:

Diagnosable conditions are often not treated and are allowed to gestate. Mental health conditions can also affect a student’s short term memory, reading ability and ability to process new information meaning their condition can be confused with Specific Learning Difficulties. This means that a student that is tired, unwilling to engage and struggling with their studies may not simply be having a bad day.

“I’m absolutely terrified of being in social situations in which I don’t know the people I’m speaking to – seminars are a nightmare. I’ve often missed my contact hours because I’ve been up all night crying and stressing and can’t face going in. I don’t feel like I can tell my tutors why I’m missing their classes, because I feel like they won’t believe me as I haven’t been officially diagnosed.”

Studying at university is a stressful time that can exacerbate existing conditions and allow new ones to develop. Undergraduate study is a particularly challenging time as students must juggle the stresses of exams and deadlines, and the pressure to achieve, with the first time experiences of living away from home/abroad, having financial responsibility, and getting accustomed to a new social environment.

“I spent the first few weeks of uni hiding in my dorm room crying my eyes out. I was homesick and wasn’t sure if I wanted to be there at all.”

Some students will be aware of an existing condition, choosing whether to disclose it or not, and may have created coping mechanisms. Other students, however, will have an undiagnosed condition or will develop one during their studies and may be experiencing mental health problems for the first time.

“As a fresher you are constantly reminded that this is supposed to be the ‘time of your life’. When it feels like the worst time of your life you feel both a sense of guilt and a pressure to keep these negative thoughts to yourself.”

The symptoms of a mental health condition or the effects of prescribed medication can have adverse effects on study, such as tiredness, anxiety and lack of concentration, creating more stress and making their conditions worse. Furthermore, the stigmatisation of mental health issues and the reactions or undue attention received from fellow students and members of staff can be both stressful and alienating for the student.

“Panic attacks followed by depression meant things rapidly spiralled out of control. I found I simply couldn’t think straight and my short term memory became terrible. The best description I could muster was that it felt as though the entire world had been rotated very slightly and nothing was the same anymore.”

If you are concerned for a student direct them to the student Wellbeing Service at Swansea University.

Injuries that are caused deliberately to oneself are considered to be acts of self-harm. The phrase ‘self-harm’ (also referred to as self-injury) describes a wide range of behaviours enacted on oneself, such as:

Self-harm is often understood to be a physical response to an emotional pain of some kind, and can be very addictive. It often happens during times of anger, distress, fear, worry, depression or low self-esteem in order to manage or control negative feelings.

When helping people who self-harm, it is often more helpful to focus on how someone is feeling rather than what they do to themselves.

Please communicate with the student as you would with any other. Mental health problems (like SpLDs) are not related to intelligence. Ensure you have the same academic expectations of them as their peers.

Acknowledge and speak to a student with a mental health condition as a specific individual in a group situation, otherwise they may feel alienated, and their mental condition may be revealed to people they would prefer did not know.

Avoid labelling a student by discussing the particular symptoms of a condition rather than the condition itself. For example, if a student has trouble making eye contact and as a result appears unfriendly, do not take offence – this may be a coping mechanism or a symptom of a condition.

Listen and have patience with the student by trying to be supportive, whilst sensitive to how they feel.

“When I started my undergraduate degree I did the responsible thing and informed my supervisor that I had depression, he informed me that in his opinion depression was a girls issue and he didn’t know what to do with girls issues and sent me on my way.”

A student displaying signs of experiencing severe anxiety, irrational thoughts or engaging in irrational or anti-social behaviour should be removed from the situation and further assistance should be sought. Do not try to reason with or challenge the thoughts of a student who is experiencing hallucinations or delusions, tell them you understand that they are experiencing them and try to keep them calm before seeking immediate medical assistance.