What are Specific Learning Difficulties (SpLDs) ?

SpLDs are neurological disorders that affect the way information is received and processed. Students with SpLDs may experience significant difficulties with certain aspects of learning, as well as the perception and understanding of visual and auditory information. Speech, language and communication impairments and information processing disorders make it difficult for students to communicate or understand ideas. Individuals are affected to different degrees.

The most common SpLDs are (click on the names below for more information): 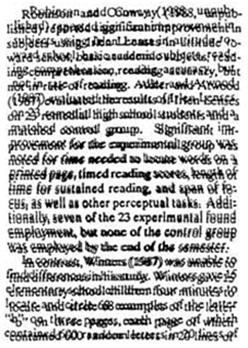 Dyslexia is the most common SpLD and is believed to affect between 10% and 20% of people to some degree. It often occurs together with other learning difficulties. It is characterised by a combination of difficulties in reading, writing and spelling that affect the ability to process, store and retrieve information that makes the learning process more difficult. Accompanying disadvantages are identified in the speed of processing, problems with short-term working memory and time perception, organisation and learning sequences.

Anika Jamieson-Cook, a final-year student of drawing at Camberwell School of Art, says her computer has been her most important tool in dealing with dyslexia, particularly in allowing her to convert e-mails to spoken words:

“The biggest problem is that they don’t understand it,” she says. She says they need to find out what a particular student finds difficult without being patronizing. “Sometimes people talk a lot more slowly to you, as if you were deaf.”

For more information on recognising dyslexia and support available, see:

Dyspraxia, otherwise known as Developmental Co-ordination Disorder (DCD), is a condition affecting motor co-ordination. As well as difficulties in physical coordination and spatial awareness/perception, students may also experience difficulties with memory, and information processing. Students may thereby encounter difficulties in planning, organising and carrying out movements in the right order in everyday situations. Dyspraxia can also affect articulation in speech and thought.

Developmental Dyscalculia (DD) is characterised by impairments in learning basic arithmetic facts, processing numerical magnitude and performing accurate and fluent calculations. These difficulties are quantifiably below what is expected for an individual’s chronological age, and are not caused by poor educational or daily activities or by intellectual impairments.

Dyscalculia often occurs in association with other developmental disorders such as dyslexia or ADHD/ADD. Co-occurrence is generally assumed to be a consequence of risk factors that are shared between disorders, for example, working memory. However, it should not be assumed that all dyslexics have problems with mathematics, although the percentage may be very high, or that all dyscalculics have problems with reading and writing. This latter rate of co-occurrence may well be a much lower percentage.

Dysgraphia affects written expression; it is either language or non-language based. It can appear as difficulties with spelling, poor handwriting and trouble putting thoughts on paper.

Dysgraphia that is caused by a language disorder may be characterised by the person having difficulty converting the sounds of language into written form, or knowing which alternate spelling to use for each sound. A person with dysgraphia may write their letters in reverse, have trouble recalling how letters are formed, or when to use lower or upper case letters. A person with dysgraphia may struggle to form written sentences with correct grammar and punctuation, with common problems including omitting words, words ordered incorrectly, incorrect verb and pronoun usage and word ending errors. People with dysgraphia may speak more easily and fluently than they write.

Non-language based dysgraphia is caused by difficulties performing the controlled fine motor skills required to write.

Common symptoms of ADHD/ADD include:

ADHD/ADD is more common in people with learning difficulties. People with ADHD/ADD may also have additional problems, such as sleep and anxiety disorders.

Autistic characteristics can co-exist with the conditions described above. Those affected often demonstrate unusual behaviours due to inflexible thinking, over-reliance on routines, and a lack of social and communication skills.

Autism is a lifelong developmental disability that affects how a person communicates with, and relates to, other people. It also affects how they make sense of the world around them.

The three main areas of difficulty which all people with autism share are sometimes known as the ‘triad of impairments’. They are:

Like most SpLDs, autism is a spectrum condition, meaning that while all people with autism share certain difficulties, their condition will affect them in different ways. Autism may be referred to as an Autism Spectrum Disorder (ASD). People with autism may also experience over or under-sensitivity to sounds, touch, tastes, smells, light or colours.

Asperger syndrome is a form of autism. People with Asperger syndrome are often of average or above average intelligence. They have fewer problems with speech but may still have difficulties with understanding and processing language.

Be aware that student may need specialist mentoring or facilitators present with them during lectures, exams and field work etc.

In lectures, the process of reading, writing, listening and summarising simultaneously, and at speed, can be difficult (and sometimes impossible) for students with SpLDs who struggle to hold ideas in short-term memory, and process them into writing at a slow speed. (Understanding and engaging with content is not the specific issue.)