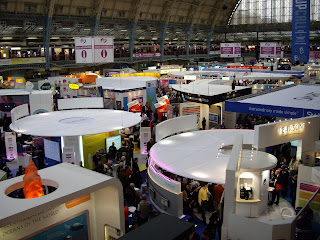 Once again it’s time for the BETT Show. The self-styled “largest educational technology show in the world.” For the first hour or so I wondered what on earth I was doing there as I heard one salesman after another explain how their product is loved by students, will improve their grades as well as save you time and money. Hmmm…. I think I’ve heard that before somewhere. However, once I got away from the main area populated by the big multinationals, I found some much more interesting stuff. WebSwami were launching their “web-based language lab” at the show. It looks to be a pretty good language lab but I can also see possibilities for all sorts of feedback. They are sending me a demo account so we can explore this further.

I like using interactive whiteboards but they tend to be expensive and have not had great take up across the campus. We’ve looked at the Wii mote as a low cost alternative but I was quite intrigued by eno. (I should insert a ‘cheese warning’ here as their promo video is very bad!) The board is magnetic, works as an ordinary dry wipe board, is much larger than the current boards we have and several can be added together to make a giant board, which could be very useful in larger rooms. An alternative to using a full interactive whiteboard could be to use a tablet from Vistablet. They are small and cheap and allow you to do much of what you might do with a board but on a desk, especially if you combine it with some of the whiteboard software, which you can generally download for free. Worth a look.

We’re currently piloting the use of Sim Venture – a business simulation game. A bit like Championship Manager for business. It’s award winning software so inevitably there is now some competition. Fantasy Couriers was at BETT. It’s similar to SimVenture but has the advantage of being web based so can be accessed from anywhere.

Another simulation, in the area of Serious Games, was from Danish company Serious Games Interactive. The have two games on global conflicts one on Gaza and one on Latin America. The game is a “3D role-playing simulation, which gives the player a chance to explore different issues in Latin America…. based on true stories and sources in close collaboration with teachers, students and experts. “

Last year every one at BETT, including me, was so taken with the EEE PC that you had to queue to even look at one! This year they are so mainstream that ASUS were at the back of the hall and you could spend all day at the stand if you wanted to. How technology moves on.