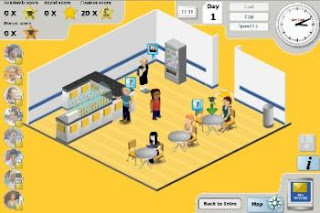 I recently attended a seminar at the University of Glamorgan on GlamStart (you need an account to access it).

GlamStart is a new part of the University’s provision for student induction and initial orientation. It had been developed in close conjunction with, and to be an integrated part of the existing student support services.

Built on a pre-existing isometric projection engine, it is a simulation of the first 10 days of university life for a brand new undergraduate. It is partly an information provider and partly a game and has the dual aims of delivering info on student support service provision and also attempting to embed the concept of balance in work, study and social activities.

This is (hopefully) achieved by students visiting different locations on a virtual map and completing a variety of activities for social, academic, financial and bonus points trying to keep a fairly flat line across the top of the four types to represent the important balance.

It is an interesting development and certainly shows potential …

Student feedback appears to be positive about both the content and the method of delivery, although not as many students have used the system as had been initially hoped for. It was felt, however, that the take up had been comparable to that for other student support services in their first year of operation. The developer and other members of the project team were all happy to admit there is more work to be done with it to include more elements (time and resource constraints in the original project meant they had to be more selective than they wanted to be with content).

It has been said that the interface to the simulation is a bit “childish”, which I guess was an attempt to present a friendlier face to new, nervous students. I wonder though, would this possibly put some students off from even starting it. Student expectation for such a simulation in the days of Second Life and other highly realistic immersive game environments would be high. However this is only supposed to take up a few hours at the start of undergraduate life …

Some questions I would love your opinions on:

Could such online induction and orientation be successfully accomplished through on-line simulation methods here in Swansea ?

Could they be successfully accomplished through non-simulation methods (e.g. other web based routes) ?

If so, what approach do you think would be good ?

What content do you feel should be included in it ?

Who do you think would be the stakeholders (with a view to including them) ?

Who should be responsible for driving and developing such a thing ?

Does something already exist ?

I have my own views on some of these, but not all. To hear what you think about any of them would be great.