A day in the life of the LGBT+ officer

As the (open place) officer I work with students and staff to improve equality, diversity, and LGBT+ representation. Alongside this I am also in the process of completing my PhD in Economics, researching the role of sexual orientation in the economy. Recently I was honoured to have earned my inclusivity badge due to the work that I have done within the Students Union in terms of pushing inclusivity at the University. I was asked to write a short blog on this, and thought the best way to do so would be to discuss “a day in the life of the LGBT+ officer”

I woke up on Friday, had a shower, got dressed, had some avocado and eggs on toast (I’m a millennial I can’t help it) and made my way to Singleton. I decided to work in JC’s, because let’s face it they make the best flat white. Fridays are my day off the PhD and are normally devoted entirely to LGBT+ officer stuff. Being the LGBT+ officer can be very challenging due to it being a voluntary unpaid role which I have to balance alongside the PhD but for me it is the most rewarding thing, as I get to make real change at the University that can have real impact on people’s lives.

So, I opened my laptop, opened my LGBT+ officer email account and (as always) I was unsurprisingly inundated with emails. However, I genuinely enjoyed reading through them. Email number 1; 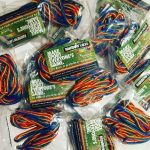 “Hi Sam, just wanted to let you know that we have an update on the Rainbow Laces campaign: we sold over 150 laces meaning a grand total of over £400 for Stonewall! Congrats! Rainbow Laces was the first campaign that I ran this year. The Rainbow Laces campaign is a Pride in Sports campaign run by Stonewall and I really wanted to introduce it at Swansea University as I myself have struggled with the anxieties of joining sports teams due to a fear of homophobia in sports (I now play Korfball which is super fun and super-inclusive). This year we introduced Rainbow Laces at Swansea University. We asked students to wear these throughout the week to show their solidarity with LGBT+ students and encourage them to feel welcome in joining sports. Next year we hope to encourage students to wear Rainbow Laces at Freshers Fair to signal to students that they will be welcomed within the respective wearers’ sport.

Email number 2; “Hi Sam, just a quick email, I have sent the below”. The email was from Grace Hannaford the Welfare Officer in the Students Union (who has devoted an unimaginable amount of her time to help me run the campaigns that I want to run (I couldn’t have done any of this without her). Grace was letting me know that she had just sent over an email about Bathroom Facilities on Singleton Campus. Me and Grace have been working hard over the past few months to increase the number of Gender-Neutral bathrooms on the Singleton campus. Gender Neutral toilets are important to trans and non-binary students; when speaking to students as part of the consultation one student explained that they often missed lectures due to needing to use the bathroom and not wanting to do so on campus due to the gendered toilets and a fear of being misgendered and this resulting in abuse. Grace and I were sending an email to get an update on how we can improve these facilities, and (hopefully) we will see some changes in the coming months. 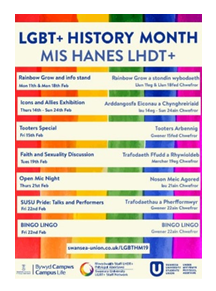 Email number 3; “Hey! Here are the promo materials for LGBT+ History Month, hope you like them!”. The email was from the marketing assistant in the Students Union and I have to say the poster was GREAT!!! This year I really wanted to introduce more events in LGBT+ History month as well as a pride style event. With the help of Grace and Russ (the events manager at the SU) we have been able to create a programme of some amazing events (which can be found here; https://www.facebook.com/events/ical/upcoming/?uid=638560602&key=AQDw_lHcd1CJ8aap). One such event is Rainbow Grow; an event where we will be giving out potted rainbow chard to students and staff to encourage sustainability as well as raise awareness of LGBT+ history month (Rainbows; get it?). We have also introduced an interactive exhibition in both JC’s and Tafarn Tawe. The exhibit involves writing on a heart a response to the question “Pride is important because?” SUSU Pride will take place on 22nd February and is set to be a super packed day. Starting in JC’s at 2pm we will have several panel discussions tackling different questions and themes surrounding LGBT+ issues in society today, such as Faith and Sexuality, Trans inclusivity and why it is important, and why PRIDE is still needed. This will be followed by some LGBT+ comedians before a night of Bingo. Yep, that’s right, I am getting students to play Bingo. With a twist though obviously! Bingo Lingo is an “exhilarating, party, raving, mad bingo night” and students love it! So, we will be queering it up a bit, giving some crazy prizes away, and celebrating everything LGBT+ for a night of Bingo at the Refectory.

Email number 4; “Hi Sam, looking forward to seeing you today so we can make some progress on the training” – Damn! Completely 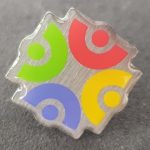 forgot that I had that meeting, and it’s in 10 minutes. The meeting was with Mandy Jack (SALT). Mandy and I have been working on a project that we hope will result in a new short film that will highlight the different needs of minority students and encourage staff to be more inclusive in their approach. The film will cover several minorities such as LGBTQIA+ identities, commuter students, Welsh language students, students with disabilities, etc. We hope to have the film ready later this year. The meeting was great; we discussed the project in more detail, decided who we would consult to get some feedback on the script, and set things in motion to move forward with the project. Plus, Mandy gave me my Inclusivity badge, a gesture that highlighted that the work that I was putting into making students and staff that are LGBTQIA+ more comfortable at University was worth it. I now wear my badge with pride, knowing that it signals to both staff and students that I am inclusive, will listen, and will do my best to help them, regardless of who they are, where they come from, or how they identify. Thank you Mandy!!