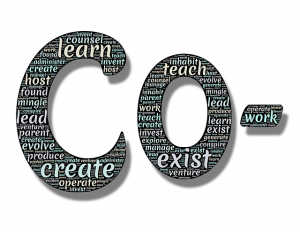 Heidi Yeandle has a number of teaching roles at Swansea University. She is convening an MA module in the English Literature department and supervising BA and MA Dissertations, while also working for the Academic Success Programme and Reaching Wider. Below she discusses her use of a “silent seminar” when teaching undergraduate students.

If you are familiar with leading seminars, the concept of silence in seminars is probably one that you have experienced, and normally the same (small) group of students can be relied upon to break that silence. In an attempt to encourage some quieter students to contribute to seminar discussions, I decided to pilot a “silent seminar”. I had read a brief synopsis of this technique in a list of “seminar models”, whereby students use written communication rather than spoken communication to respond to questions in a seminar environment, and I anticipated that it would be an interactive way of including more students in discussions.

I trialled this activity in a seminar on a selection of Emily Dickinson’s poems. Students had been asked to read some of her poetry ahead of the class, and were also given some questions to think about in preparation for the seminar. In the class, students were divided into small groups and each group was given one of these poems, printed on A3 paper in a large font. They were asked to annotate the poems in relation to particular themes, the language used, and poetic techniques (in line with the questions). After 5 minutes, the poems rotated, so each group had a sheet of A3 paper with a different poem on, with the previous group’s comments and interpretations. Students were asked to continue to annotate the poems, but to also read the other annotations and add to these, thinking about alternative interpretations, or whether a comparison or contrast could be made in relation to another Dickinson poem, thereby encouraging students to interact with other students in the class without speaking. The poems continued to move between groups until students were reunited with the first poem they annotated, giving them the opportunity to see how the rest of the groups responded to that poem and their reading of it. At this point the seminar moved onto individual written activities based on the poetry, followed by written peer feedback, for which they were given some guidelines.

It’s worth noting that I never told the students that the session would be based on written communication, and that I refrained from using the term “silent seminar” – the students were set the activities, and were not asked to work on them silently. Some of the groups did speak to each other quietly before and during annotating the poems, while others didn’t. In reality, it was a “quiet seminar” as a result, but my aim of a “silent seminar” was met – the quieter students annotated the poems, putting forward interpretations which they had not offered in previous weeks in verbal discussions, and they also had the opportunity to react to other students, and to have feedback on their interpretations from their peers. This resulted in detailed close analyses of the individual poems, as well as an overview of some key aspects of Dickinson’s poetry as a whole. The oral feedback for the lesson was very encouraging – the students said it was useful to cover so much ground and read and build on other interpretations. However, they did say that they could not see the activity working so well with a novel. I agree that discussing a novel as a whole in a “silent seminar” would not be productive, but there is scope for doing a detailed close analysis of an extract from a novel in this style. As well as short extracts of literature, the “silent seminar” format could be applied to different disciplines: it could be used in relation to discussions of photography/art, as well as to case studies, to a selection of studies on a particular topic, or to examine different theoretical approaches. More broadly, the technique could be used in relation to peer feedback – I have used variations of this model when teaching essay writing for the Academic Success Programme, and have seen that it encourages students to give constructive feedback in this environment.

If you are thinking about experimenting with this approach, bear in mind that if you use large sheets of paper for whole groups to annotate, students can’t take these home. Allow enough time for students to take pictures of them, or decide to photocopy them and put them on Blackboard so this work can be accessed. This gives students the opportunity to see and keep the final annotated copy of each text, which they would lose out on otherwise. Going forward, I’m considering using an online mind-mapping tool such as GoConqr, which would allow me to collate the annotations into mind-maps, with (using the poetry example), poems in the centre, with the opportunity for students to continue to add to them. Thanks to Dr Samantha Buxton for introducing me to such software at her talk at the 2016 SALT Conference.