Home community It’s Wednesday so it must be Bristol……

It’s Wednesday so it must be Bristol……

It’s Wednesday so it must be Bristol and the Heads of E-Learning Forum or Helf as its known to its friends. Helf according to its website is, ‘a network of senior staff in institutions engaged in promoting, supporting and developing technology enhanced learning. We have over 125 nominated Heads from UK Higher Education institutions and a regular programme of well attended events.’ They have meetings  2 or 3 times a year as well as being involved in a number of reports and other publications. They also run a lively JISC mail list that brings a lot a remarkably useful information into my inbox.

One of the real values of this group is that your hear what really goes on in other institutions all shared under the Chatham House Rule. None of the proud parent, ‘Oh our young lecture capture is doing remarkably well at University’ here. What you get is a much more nuanced, honest view and all the better for it.

This was my first face to face meeting so I wasn’t quite sure what to expect but the title ‘Blending physical and virtual spaces’ was intriguing and I was keen to meet some of the people who had been sharing all that information. Interestingly, there were people from all over Britain but remarkably few from other Universities in Wales considering that Bristol is not that far away!

As I often do I won’t give a blow by blow account of what I did on my day out but instead share some of the many useful things I got from the day.

There was an interesting project from Derby using video feedback the https://flexiblefeedback.wp.derby.ac.uk. This involved staff to student feedback but also student to student feedback, helping students to learn to both to give and receive critical feedback. The trick will be to see how scalable it is. Another project The Dynamic Lab Manual in Bristol and has won awards and you can read about it here –  http://www.chemlabs.bris.ac.uk/DLM.htm

UCL have created a new role of Learning Spaces Specialist, Paul Burt, who sits in the E-Learning Environments team. His role is to make sure that learning space at UCL are actually fit for learning. So they don’t have a ‘let’s have what we have already got but bigger, bums on seat approach’ that inflicts so many universities. Instead, making learning spaces effective for learning is at the heart of their design. The have some extensive Learning Space Guidelines that outline what to consider when requesting, specifying, designing, supplying, installing and maintaining facilities and environments in UCL’s learning spaces. The guidelines cover a whole range of requirements from access to the amount daylight and from acoustics to technology. One major area talked about was the variety of teaching uses a room could be used for. A strong message that came through was the outdated nature of traditional large lecture theatres and that theatres such as the ones below can accommodate both large group teaching and small discussion groups in the same session, make good use of the space and are not as expensive as may be thought. In some case they may even be cheaper than traditional lecture theatres. 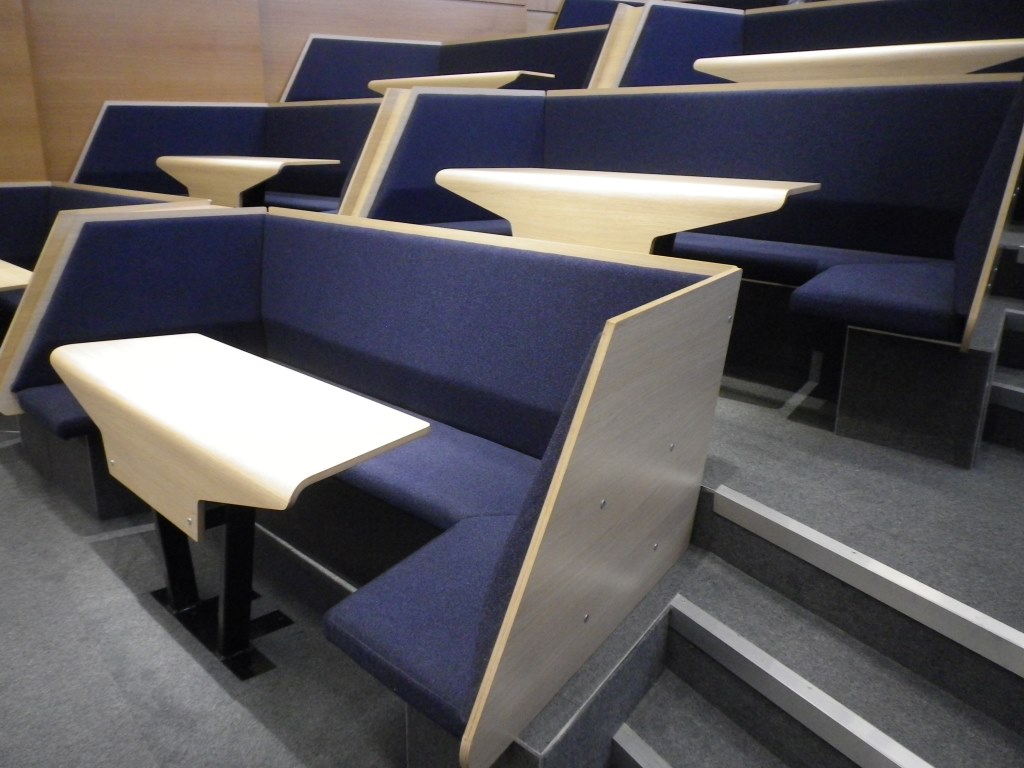 Adding power in every seat may be outmoded when tablets can last for several days on one charge but may be needed in the short term by some students. UCL have power in the front two rows. If you want power, you need to sit at the front, which may well have other benefits for you as well.

Peter Bryant, Head of Learning Technology and Innovation at LSE was looking at the success or otherwise of e-learning and argued that there are numerous small local projects still in the use that have not reached tipping point. I think JISC has been responsible for a lot of the small project culture of e-learning, making the most important thing chasing the next round of project funding where the new is always more exciting rather than turning a project into an institution or sector wide application. Additionally he argued that institutional dictats do not always have the desired effect. What’s needed is change from the middle out.

Finally, Mark Gamble from the University Bedfordshire, home of the first series of Freshers,explained that his role is to manage the e-journey of their students from the moment a student thinks about coming to Bedford and clicks. Quite a task but how joined up are we in this process?